As we acknowledge Treaty Recognition Week 2022 on November 6-12, we will feature a daily post that honours our treaties and shares knowledge of the belts associated with storytelling.

We begin with an interview with Martin Powless (Kahlunyunti), Policy Analyst at Oneida Political Office. 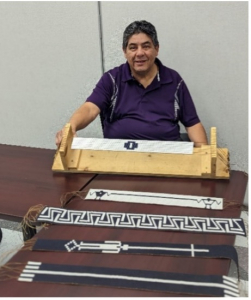 What’s your background?
I’m a member of the Wolf Clan and have lived in Oneida most of my life. My academic career was both in Windsor, with a Bachelors in Sociology and at Western University where I graduated with a law degree in 1992. After practicing criminal law from 1994 to 1998, I soon realized the white man’s system did not work for the Indigenous people and moved into a career at Oneida.

I held the position of Administrator in Lands and Estates Department, did a brief bit of work at Chippawa’s of the Thames, and then returned to Oneida as Policy Analyst.

The Indigenous Nations viewed the land as Mother Earth, we are caretakers of the earth, and no one “owns” the land. There certainly was not an intent to “sell” our lands to anyone.

The treaties were often misrepresented to the First Nations. For the Indigenous Nations, the treaties understood to be the beginning point of an ongoing relationship.

The settler Nations viewed the treaties as an absolute surrender, a “one- and- done”” transaction in time.

Most treaties were not written in a way that First Nations understood. The true meaning of the documents was not properly explained to First Nations and the papers were used to indicate a surrender or sale of lands. In legal terms, there was not a “meeting of the minds.”

Language was a major barrier between the parties. The words that were written in the treaty, were only a small portion of what was discussed during negotiations and many terms that were discussed never made it to the final, written versions of the Treaties.

It’s important to note that Oneida is involved with the Nanfan Treaty (Britain), along with Iroquois and the Great Peace of Montreal Treaty (with France) with 40 other Nations, both in 1701. Other treaties were largely with the U.S. government and Nations residing there.

Wampum belts were made to symbolize and represent our understanding of what certain treaties meant and to create a physical mnemonic/memory aid to pass along to our future generations.

Tell us about the belts and why they are important.

Each belt is a piece of history, a story. Many of the treaties were solidified with the belts. Each have a story and are meant to be used in storytelling and in teaching our history. They are a physical representation of the stories of our people.

It is important to actually hold and physically experience these belts when telling the stories. Through the belt’s physical energy, inspiration is passed on to each other and to next generations.

Like the treaties themselves, they are living artifacts. Some Elders have described them as a river of information, a living document that flows between generations.

I create these belts for three main reasons:

How do you make them?

I appreciate the craft of storytelling and making the belts for me is a personal way to be connected. Each belt can take from 45 to 100 hours. They are done on a wooden loom with tubular glass beads and sinew strings. When the belt is completed, it is smudged and prayed over with the medicines to achieve its stated purposes, wherever it may find a home.

What is your hope for the future?

In our tradition, women are those that own the lands, nominate chiefs to grand council and controllers of the village. I am hopeful that women’s group voice is heard, especially as it reflects to youth, drugs, violence. Our ancestors are not happy that we are letting the important things slip away.

I am also hopeful that Treaty Week is a reminder to us all about the importance of love, peace and unity towards each other.

Watch the video below, where Martin explains multiple belts and the treaties and stories associated with them.